Please find the link to the C7 final assembly below.

Last but not least we have Mrs Grigor – one of the nicest teachers you will ever meet.  Did you know that she creates Gaelic resources for Stòrlann and that she is an author?

Here she is playing a few tunes on the guitar.  We hope you enjoy. 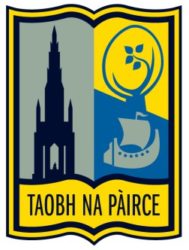 Well done to everyone who took part – you all deserve an award.

Good afternoon everyone.  We hope you are all well and that you enjoyed the C1-3 competition this morning. We will begin by watching the C4-7 auditions and then come back at 2pm when we will find out who won Taobh na Pàirce’s Got Talent 2020 (C4-7).  We hope you enjoy the acts!

Good morning everyone.  We hope you are all well.  We will begin with watching the C1-3 auditions and then come back at 11am when we will find out who has won Taobh na Pàirce’s Got Talent 2020 (C1-3).  We hope you enjoy the acts!

Just a reminder for those who are entering Taobh na Pàirce’s Got Talent that the closing date is THIS FRIDAY.

We are excited to announce that Gaelic singer Kathleen MacInnes will be adjudicating the entries.

Kathleen MacInnes is a Scottish singer, television presenter and actress, who performs primarily in Scottish Gaelic. She is a native of South Uist, Outer Hebrides.  In 2010, she appeared on the soundtrack to the Ridley Scott film Robin Hood.

Kathleen has been a regular guest on music programmes such as MacTV’s Bard Nan Orain, the award-winning BBC series Aig Cridhe Ar Ciuil, and Mike Alexander’s Columba Sessions, where she sang alongside leading Scottish and Irish singers and musicians.

Kathleen also took part in the concert Flower Of The West, a tribute to Runrig brothers Calum and Ruaraidh MacDonald, and with Blas, as a support act to Van Morrison.

Kathleen’s various projects on television have included being presenter of Tacsi, a Scottish BAFTA award-winning television show of Gaelic and Celtic arts and culture, a part in the Gaelic soap Machair, parts on BBC comedy shows such as Ran Dan and PC Alasdair Stewart, the film Interrogation Of A Highland Lass, children’s TV programmes, and regular voice-overs for BBC animations.

A reminder of the rules are below:

If your child would like to participate, please send in your performance piece along with the attached entry form to the school admin email account by no later than Friday 12th June. Please make sure of the following: